Posted on January 5, 2018 by therealdelia

I often feel like the start of a new year is like the beginning of a race toward a list of accomplishments I hope to complete before the year’s end. Last year is the first year in a long time when I completed everything I set out to accomplish, and now I feel like I need to set the goalposts a little higher to keep challenging myself.

One of my new challenges is to write a new blogpost every week. So here I am, tackling that resolution on time.

Years ago, I was good about blogging on a regular basis. I wrote nearly every day on a wide variety of subjects, garnered a few follower friends along the way, and I still have a few friends I keep in touch with even now as a result (Hi, Kate, if you read this!). For a ton of reasons, I lost the habit, replacing those blogposts with Facebook, Instagram, and Twitter posts instead.

What I’ve found, though, is that even though I’m still posting regularly in those new places, I don’t do as much in depth writing about subjects. I tend to post photos of my dog or links to things someone else posted that I thought were interesting, often without very much writing of my own to accompany them. I do have more conversations in those places, but very little of what I post is truly introspective or planned in any way.

Blog writing tends to make me slow down and really think about what I want to say. That, to me, has value, and I miss it.

Also, however, those other social media places tend to make me slip into the bad habit of looking for instant gratification and distraction. I will sit down, telling myself I’m just going to look for five minutes at the newsfeed and respond to my notifications, and the next thing I know, an hour has gone by with me skimming through people’s posts, and I still haven’t responded to the one thing I went there to do.

Social Media is great, and I love keeping in touch with people there, but if I’m ever going to finish the next book in my vampire series (or anything else, for that matter), I’ve got to be more conscious about my time. I won’t be quitting it entirely, but I need to limit myself there.

Therefore, as of this week, I resolve to spend less time on social media, and dedicate one day a week to writing longer, more well-thought-out and engaging posts. I’ll still have some fun and interesting links at the end of my blogpost. On social media, you’d be getting several of these a day, but here you’ll get the best of them, and hopefully the more narrowed focus will be more interesting.

I’m using an app called Fabulous to help me stay on track with my resolutions this year. Exercise, meditation, drinking more water, scheduling time to read…these are all a few of the things I’m trying to establish as good habits, and so far the app seems to be working. Granted, it’s only January 4th, so the real test will be if I’m still doing all those things in June.

What are your resolutions? What tools are you using to hold yourself accountable? I’ve considered a Fitbit. Do I want one? Why?

Last month, I talked about how I came to terms with letting go of my original outline of Trial By Blood (the third book in my vampire series). The characters had led me along a different path in Out For Blood than what I’d originally planned, and the ending of that book meant that I had to rethink everything for the next one. I’ve begun writing now with the new plan, and I’m very excited about how things are going already.

I’m doing a ramped up version of the 90-Day Write (The annual challenge to write 85,000 words in 90 days (January through March) is also the 90-Day Write cycle, the first cycle in the year-long 85K Writing Challenge) but instead of writing the book in 90 days, I plan to complete it by the end of February. It won’t be the finished version by any means, but the first draft of the story will be complete and ready to be revised and edited in March and April. I intend to release the book in the summer, and I’m hoping for July 1st as a publication date (though that isn’t quite set in stone yet). That is very quick turn-around, I know. I also know that I can do it. 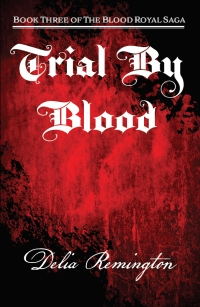 In setting up the publishing schedule for Trial By Blood, I’ve set myself some very straightforward goals and deadlines. This strategy worked for me last year, enabling me to publish the first two books of the trilogy five months apart, so I am confident I’ll be able to release this third installment on time too.

When I began working from home, I had trouble at first sticking to a regular schedule. There was always something around the house to do – laundry, dishes, etc. – and I had a hard time setting firm boundaries with my family and friends, so I often answered the phone or ran errands during time I had planned to set aside for work. But then I thought about what I would say to an employee of mine who did those things rather than stay on task during work hours, and I knew that had to change if I was ever going to accomplish all of my goals.

No one takes you seriously as a professional if you don’t treat yourself that way.

Once I’d internalized that simple but essential truth, I had a sit down with my family and established clear ground rules. Set office hours. Firm boundaries. No interruptions except for mealtimes, and even then, if I’m on a roll, I can’t always just stop what I’m doing. They text rather than call when they need something unless it’s an emergency, and understand that it may take a little while before I respond. I explained that just as I wouldn’t show up at their place of business and interrupt their work expecting instant attention when they had projects or customers to focus on, they couldn’t walk into my office or call in the middle of my writing time and expect me to drop what I’m doing either. Just because I’m at home, that doesn’t mean I am not working. I have set aside specific days for errands and tasks around the house, and I do a lot of cooking ahead in bulk and then freezing meals that can be easily reheated so I don’t have to spend every weekday at the stove rather than at my desk.

I’m probably the hardest boss I’ve ever had. I work extremely long days, frequently eating lunch at my desk and working until late in the evening (like now, for example). I work holidays and weekends. I almost never take a day off unless I’m sick, and even then I often work from bed. I work even when I’m on “vacation.” But honestly, this is the first time in my life I’ve had total autonomy over every aspect of what I do. That’s both thrilling and kinda scary, really, when you stop and think about it. If everything goes well, I get all the credit. If everything crashes and burns, it’s entirely my fault. That’s why I work so hard. I’m fully invested in every step along the way, and the final product reflects entirely on me. I wake up every day truly excited to get to work. The hardest part of my day is making myself stop, knowing there’s more I wish I had time to do.

In years past, when I finished a big writing goal, I bought myself one big thing I truly wanted. Generally, it was an expensive book, but this year, when I finish writing Trial By Blood, I’m buying myself a Remote Control Millennium Falcon. I have no idea where I’ll fly it, though I’m pretty certain my dogs will go berserk at the Chewbacca sound effects, and those reactions will make it all worth it.

A friend of mine recommended an app called Litsy for authors, and I made an account, but I haven’t really figured out what to do with it yet. It seems like a version of Instagram but with a very narrow focus, although I admit that maybe I am misunderstanding the purpose.

Do any of you use Litsy? How? I haven’t posted there yet because frankly I’m confused, and it feels like an extra thing that could turn into a distraction rather than something I really need. If you use it, tell me about your experience in the comments. I’m really curious.

Finally, here’s some stuff I found interesting this week:

Got other things I should see? Drop me a line in the comments!

“How do I get copies of your books,” you ask? All the links for ebooks and paperbacks are conveniently listed right here.

Autographed Paperbacks of both installments in The Blood Royal Saga can be ordered directly from Eagle Heights Press.

If you’ve read either or both of the books, I’d love it if you’d take a moment to post a review on Goodreads or Amazon. Reviews help me improve and they also help other readers find the series as well.

Also, sign up for my newsletter if you haven’t done so yet. I promise no spam. Just updates on books and events.

← Where I’ve Been. Where I’m Going. Come With Me.
Five ways I use Bullet Journaling →